The Hungarian Central Statistical Office has released its latest set of retail sales and industry data. They look good given the circumstances, but although they show that Hungary might have a chance of avoiding a quarterly drop in GDP in the second quarter, the markets do not seem affected. The market remains focused on global recession fears and the energy crisis, which are creating a sense of risk aversion, with investors shunning emerging markets, pushing the Hungarian forint to record highs on a daily basis.

Retail sales slow in May

In May, after extremely dynamic growth in the previous months, the expansion of retail sales slowed. At the same time – according to calendar data – the turnover volume of the sector increased by another 11.1%. Base effects partly explain the slowdown, but the contraction of 0.1% measured on a monthly basis suggests that there is more to it.

In detail, food retailing showed stagnation on a monthly basis in May, but this cannot be considered extreme. In fact, due to last year’s low base, this translates to an annual expansion of 3%. A more serious problem can be observed in the case of non-food retail. The 9.5% year-on-year growth is the slowest momentum since January, with a 3.2% year-on-month decline in subsector revenue. It seems that households were able to spend most of the lump sum transfers they received in the first quarter (this can be seen in the big jump in retail sales in March), and after that the volume of consumption in the trade of non-food retail has declined.

Within the non-food retail sector, the most dynamic expansion was measured in second-hand stores (54% year-on-year), which likely shows the main reaction of households to runaway inflation. More and more people are trying to find alternative sources to buy goods at cheaper prices. This probably means that the structure of consumption has already started to change. Sales at furniture and appliance stores rose only 1.1% year-on-year, indicating a significant reduction in spending.

The only positive surprise came from fuel retailing. Despite tighter price cap restrictions (fewer consumers can fill up at the price cap), gas station sales increased by 3% on a monthly basis, translating into a 37.5% annual increase in May. However, it is important to note here that at the same time last year consumption was quite restricted due to Covid-19 restrictions.

Based on today’s retail statistics, it’s clear that Hungarians are adjusting to higher inflation, but so far this hasn’t yet resulted in a significant decline, but rather stagnation the volume of consumption. The limited data available indicates that retail consumption may have plateaued in the second quarter of 2022 after trending upwards since reopening in 2021.

For the time being, this means that consumption could still be higher compared to the previous quarter, so its contribution to quarterly GDP growth could still remain positive.

The industry is back on track, sort of

According to the raw data, industrial production grew 9.4 percent year on year, while the expansion rate is 3.4 percent after adjusting for the working day effect. The significant difference is due to the fact that there were two more working days in May this year than in 2021. Not a bad performance in this environment, but the situation is improving if we check the reading monthly. This shows growth of 1.4%, ending a two-month period of declining industrial production volume. 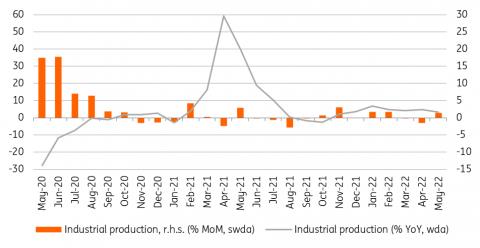 As expected, after the initial shock of war and sanctions in Ukraine, companies slowly found alternative routes to purchase spare parts that were in short supply. The Statistical Office pointed out in its comment that important subsectors such as car manufacturing and the electronics industry were able to increase their production in May, which could be a sign of this adjustment.

However, it is too early to rejoice as the increase in May was just enough to approach the peak production level achieved before the war. Going forward, the big question will be whether the two most important sectors (automotive and electronics) will be able to further increase their production, and to what extent the food industry will be affected by supply disruptions (sanctions, war, drought). If the major sectors can adapt flexibly and the smaller sub-sectors are also able to grow considerably, it is conceivable that industry’s contribution to GDP growth could be positive in the second (and maybe in the third) trimester.

In the first two months of the second quarter, for which we have hard data, the industry posted a contraction on a quarterly basis. This means that a repeated good performance in June is necessary to avoid a negative contribution from this sector to GDP growth. There are reasons for optimism based on various surveys, such as the manufacturing PMI, which jumped to 57 in June.

Based on April-May data, the picture for GDP growth is mixed so far, and it is unlikely to brighten up in June, especially if consumption moderates while the industry is recovering somewhat. Overall, we are rather cautious about the second quarter GDP outlook, expecting a slight contraction on a quarterly basis. However, this would still represent GDP growth above 5.5-6.0% year-on-year for the April-June period.


Legal disclaimer: MENAFN provides the information “as is” without warranty of any kind. We assume no responsibility for the accuracy, content, images, videos, licensing, completeness, legality or reliability of any information in this article. If you have any complaints or copyright issues related to this article, please contact the provider above.