Despite her Hungarian origins, Eva Zeisel is little known in Hungary, although she is a world famous potter. After an international career spanning nearly nine decades and hundreds of completed creations, she died in New York in 2011, shortly after her 105th birthday. His work will be with us for a long time, appearing not only in art markets, online shops and homes, but also in the world’s most important private and public collections.

Eva Zeisel was born Éva Amália Striker in Hungary on November 13, 1906, into the prominent Striker-Polányi family of Budapest. Her grandmother was Cecile Wohl Polacsek, famous for her literary salon, while her mother was Laura Polányi, the first female graduate in Hungary.

Eva has tried and excelled in several artistic disciplines: dance, theater and painting. In 1923, she was admitted to the Royal Hungarian Academy of Fine Arts, where she was a pupil of János Vaszary. She then worked as a set designer and finally turned to pottery in 1925. 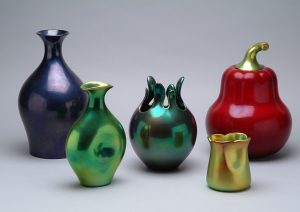 In 1925, she was officially accepted as a member of the Association of Roofing, Stove and Shaft Craftsmen of Budapest and soon found work at the Gránit factory. She was only 19 at the time. From there she went to Germany, where

she designed her first dinner services, tea sets, vases and inkwells at the Schramberger Majolikafabrik.

In 1931, Eva Zeisel married Alexander Wiessberg-Cybulski, with whom she moved to the Soviet Union, where she eventually became the designer and then the artistic director of the Lomonosov factory. Here she managed to create a set of inexpensive plates that could be used in any factory canteen, school, kindergarten and hospital throughout the Soviet Union, the production of which cost only pennies. 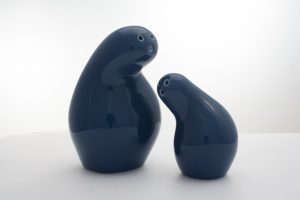 These pieces are part of the Town and Country design, often referred to by Zeisel as its Shmoo salt and pepper shakers (based on the cartoon character of Al Capp).

In 1936, however, Eva was arrested, accused of collaborating with her colleagues in preparing an assassination plot against Stalin. She spent more than a year in prison, but then managed to escape to London, where she met her second husband, Hans Zeisel, with whom she decided to move to the United States.

It was here that Eva Zeisel’s career took shape,

teaching at the prestigious Pratt Institute and designing the white ensemble called ‘Museum’ for the Castleton China Company, which was exhibited at the Museum of Modern Art in 1946.

She also designed the Town and Country decor and the Wee Modern for children, among others. She worked for the Hall China Company, created an Eva set for Rosenthal in West Germany, and briefly dabbled in furniture design. 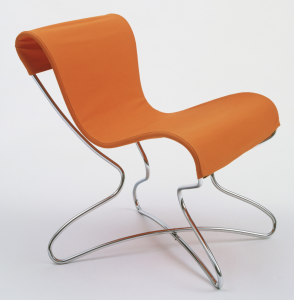 In the 1980s, Eva traveled to Hungary where she presented an exhibition on life at the Museum of Applied Arts. Later, she returned to Russia to the Lomonosov factory, where she created a new tea set for the Russian customer. In 2004, Eva Zeisel received the Central Cross of the Hungarian Order of Merit. She has also received awards in the United States and Great Britain.

His works can be found in the collections of the most important museums in the world, including the Metropolitan Museum of Art, the Museum of Modern Art and the British Museum, among others.