Hanoi (VNA) – The Speaker of the National Assembly, Vuong Dinh Hue, hosted receptions for ambassadors of Bulgaria and Hungary in Hanoi on May 31.

In a meeting with Bulgarian Ambassador Marinela Petkova, Hue reiterated Vietnam’s foreign policy of attaching importance to, consolidating and promoting friendship, multifaceted and long-term cooperation with traditional friends, including Bulgaria.

The Vietnamese NA will work to continuously improve relations between the two countries, their legislatures and their peoples, he pledged.

Highlighting the results of cooperation between the two countries, Vietnam’s top legislator said bilateral trade revenue in 2021 doubled from the previous year.

Legislative ties have also been maintained in recent years, he said, adding that the two sides supported each other in regional and international parliamentary forums.

In response, Ambassador Petkova pointed out that Bulgaria is one of the first countries to establish diplomatic relations with Vietnam, and the traditional friendship is flourishing.

She suggested the two countries promote cooperation after two years of COVID-19, saying Vietnam is Bulgaria’s partner in Southeast Asia and Asia as a whole.

As a member of the European Union (EU), Bulgaria wants to expand its collaboration with Vietnam, a member of the Association of Southeast Asian Nations (ASEAN), she said.

The diplomat agreed with Hue’s view that the two countries should strengthen their cooperation and friendship through Party, State, Government and NA channels, as well as exchanges between the two countries. peoples.

She promised to contribute more to strengthening bilateral cooperation in the fields of economy, trade, investment, education, training and tourism, putting it on par with the centuries-old friendship. .

Hue said he hoped the ambassador would continue to coordinate closely with Vietnamese agencies to take steps to help deepen and advance the relationship, for the benefit of both peoples. 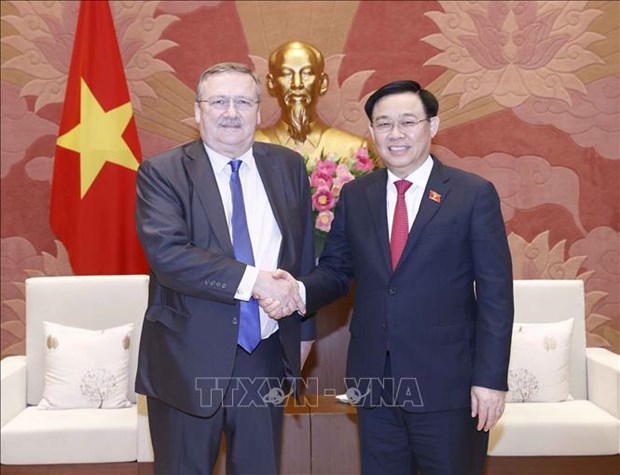 He said Vietnam always cherishes and hopes to forge its multifaceted cooperation with Hungary – Vietnam’s first global partner in Central and Eastern Europe.

He hailed the positive progress in bilateral relations, with high-level meetings and visits by leaders from both countries. Notably, during Party General Secretary Nguyen Phu Trong’s visit to Hungary in 2018, the two sides transformed their relationship into a comprehensive partnership, which demonstrates the leaders’ determination to deepen ties.

Csaba, for his part, said that the cooperation agreement reached by the two legislatures has helped to deepen legislative relations, adding that the thematic seminars organized under the agreement have proven effective.

In this regard, Hue said that these thematic seminars provided opportunities for parliamentarians from both countries to exchange experiences in legislation, and the agreement should be further expanded.

The two sides compared notes on legislative cooperation in the fields of culture, health and education, among others.

Hue urged the Ambassador to continue close coordination with Vietnamese ministries and agencies to deepen the comprehensive partnership./.