The Vietnamese official said that relations between their legislative bodies have become stronger and more practical, adding that the two sides have supported each other and coordinated closely and effectively at the multilateral parliamentary forums; and brought many initiatives to regional and international parliamentary organizations.

Cuong expressed his hope that the offices of the two legislatures will continue to coordinate closely to serve the Vietnamese and Hungarian NAs to implement their cooperation agreement signed on June 27, 2022 in Budapest on the occasion of the official visit to Hungary of VietnamNA President Vuong Dinh Hue. 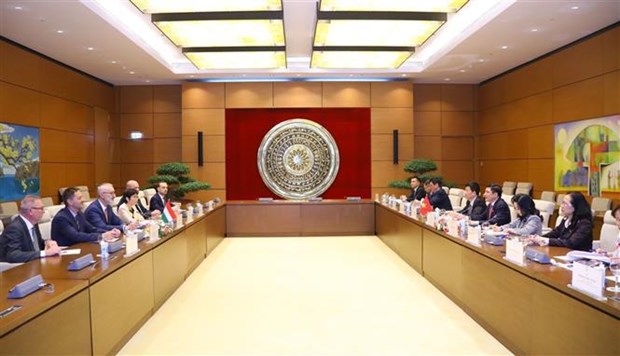 At the talks (Picture: VNA)

He suggested Such Gyorgy consider signing a Cooperation agreement to further share work experience and strengthen cultural exchanges between officials of the two NA offices.

The Hungarian official praised Vietnam for its great achievements in reform and integration, and its rapid economic growth, and underlined the crucial role played by the Vietnamese NA in the process.

Frequent exchange of experience between NAs of the two countries is the key to effective bilateral cooperation, Gyorgy said.

He praised the establishment of the Vietnam-Hungary parliamentary friendship group, saying the Hungarian NA is also accelerating the formation of a similar group in Hungary.

In accordance with the Vietnamese official’s proposals, the guest said that the signing of such a cooperation agreement between the two ANs will contribute to the effective implementation of the agreement signed during the recent visit of the senior legislator. vietnamese to Hungary./.